Greg explains how you can deal lovingly with a difficult employee—like a company thief—in this short snippet taken from a live seminar.

When the Company Thief is a Co-Worker

You said, “What about the employee who's stealing from— “ Depends. So, let's say I'm working with somebody on a project and they're lazy, they’re dishonest. Eventually I can go one of two ways: I could just go, “This, this isn't going to work out. It's just, it's not working for me.” How do I let go of it? Remember, I said before, everybody is wounded or emotionally retarded. That person is not suited to work with me. I'm not going to say they can't work with somebody else on this particular project. That doesn't make him a bad person, just doesn't fit for me.

When the Company Thief is Embezzling from You

On other occasions, I adjust other ways. So, I had an employee—I've employed hundreds of people over the years—I had an employee who was embezzling from me. And so I brought her into the office and I said, “We've found that you've been embezzling.”

“Wasn't really a question—you have.”

And then she just bursts into tears, and I said, “I just wanted to find out what's going on with you,” as opposed to, “You're fired and here are the police,” which I could do. "You go straight to jail.

Well, she's a single mother, she has two children, she isn't making enough money and she found it irresistible. Well, that makes sense and so I said, “Well, let's do this. Let's raise your pay and put you in a job that doesn't involve your handling money.” And she turned into one of the best employees I've ever had. Imagine her loyalty. I was willing to work that out. But you just let it go. The past is gone right now. 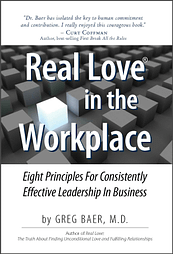 Learn more about Real Love in the Workplace

Do you feel like something is missing from your life, your relationships, your marriage, your family, even your workplace?

Download these Free Reports and learn how you can actually eliminate that feeling.